Take A Look At New Zealand — The Kiwi Land 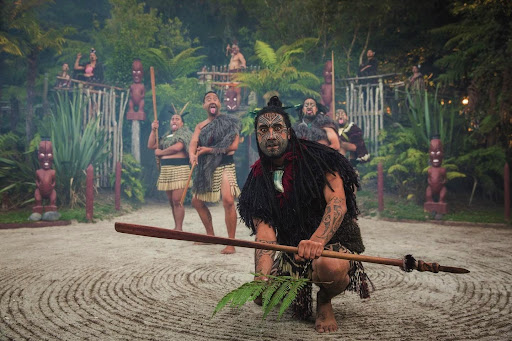 Take A Look At New Zealand —The Kiwi Land

Aotearoa, The Island of the Long White Cloud

Aotearoa is the Māori word for New Zealand. Even though it has different translations, the most popular one is the “long white cloud.” The Māori are the indigenous people of New Zealand who arrived in the country more than 1,000 years ago from Hawaiki — a Polynesian island.

According to the Māori, the first explorers that arrived in Aotearoa used the stars and the ocean currents as a guide. They were sailing across the Pacific in their canoes when they sighted the North Island for the first time. As the story goes, the island was all covered with an enormous white cloud and that is how the name originated.

In 1840, when the Māori people signed the “Waitangi agreement”, Aotearoa became New Zealand — a British colony. In contrast to what happened in many colonized territories, the Māori culture still exists and coexists with other cultures. Their history, language, food, and traditions are still alive, and there are many places that can be visited to get to know and sense this incredible and unique culture.

After the agreement, people from England, Scotland, and Ireland were the first to settle down. Since then, people from all over the world have been migrating to this amazing country. Due to a variety of reasons, there are now more than 1 million immigrants living in New Zealand — 21% of the total population. The following geomap shows the countries of origin for New Zealand’s immigrant population. As you can see, immigrants have come from all over the world but “[t]he main countries of origin of immigration in New Zealand are the United Kingdom, 25.49%, China, 8.91%[,] and India, 6.71%.1 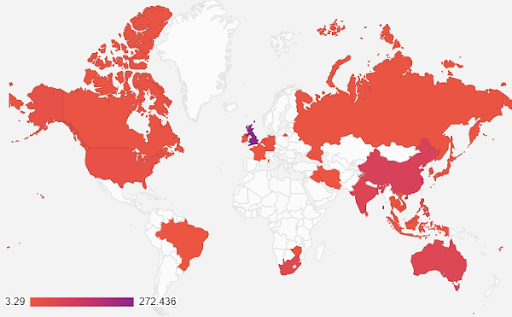 Indeed, New Zealand is an incredibly multicultural country. It will not come as a surprise, then,  when you read on and find out just how many people from different nationalities I had the pleasure ot meet during my trip. 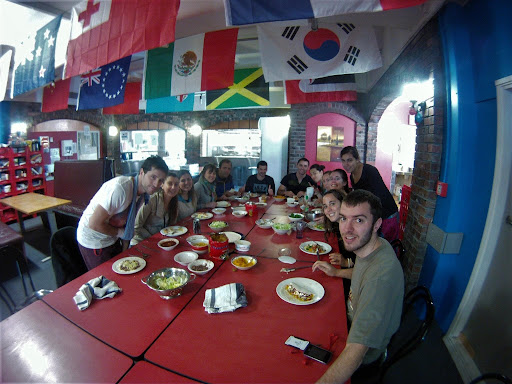 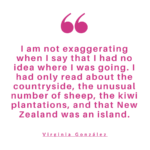 I cannot easily recall why I started to plan my visit to New Zealand, but it was a trip that ended up changing my life. At the time, New Zealand wasn’t necessarily high on my list of places to visit and I didn’t have many friends that had traveled there. What I did know, however, was that my father had promised me that If I finished my studies on time he was going to give me some money as a present. And this was my motivation! After I completed my studies, this generous gift allowed me to buy flight tickets and start the adventure.

I am not exaggerating when I say that I had no idea where I was going. I had only read about the countryside, the unusual number of sheep, the kiwi plantations, and that New Zealand was an island.

As I look back, I can now say that the trip was amazing because I had no expectations or concerns. I was completely open to whatever was going to happen without worrying about it. I am not sure If I will be able to be as relaxed and unencumbered on any other trip.

Soon after I arrived, I started talking with a friend of a friend who was working in the middle of nowhere on a kiwi plantation. Two days later, an Indian man interviewed me and “luckily” I got the same job. I literally started working the next day — the adventure started in a 100% New Zealand style! 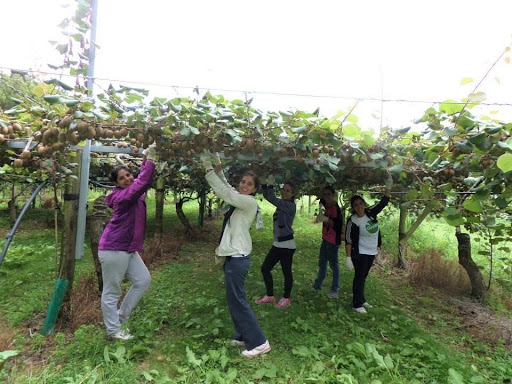 Here I am with coworkers, working on the plantation

Everyone working on the farm was staying at the same accommodation. This included other Argentinians as well as Fijians and Indians. I shared my room with a Fijian lady who woke me up very sweetly on my first working day. I have to admit that I was very confused at 6 am, having to go to work while it was still very cold and dark outside. 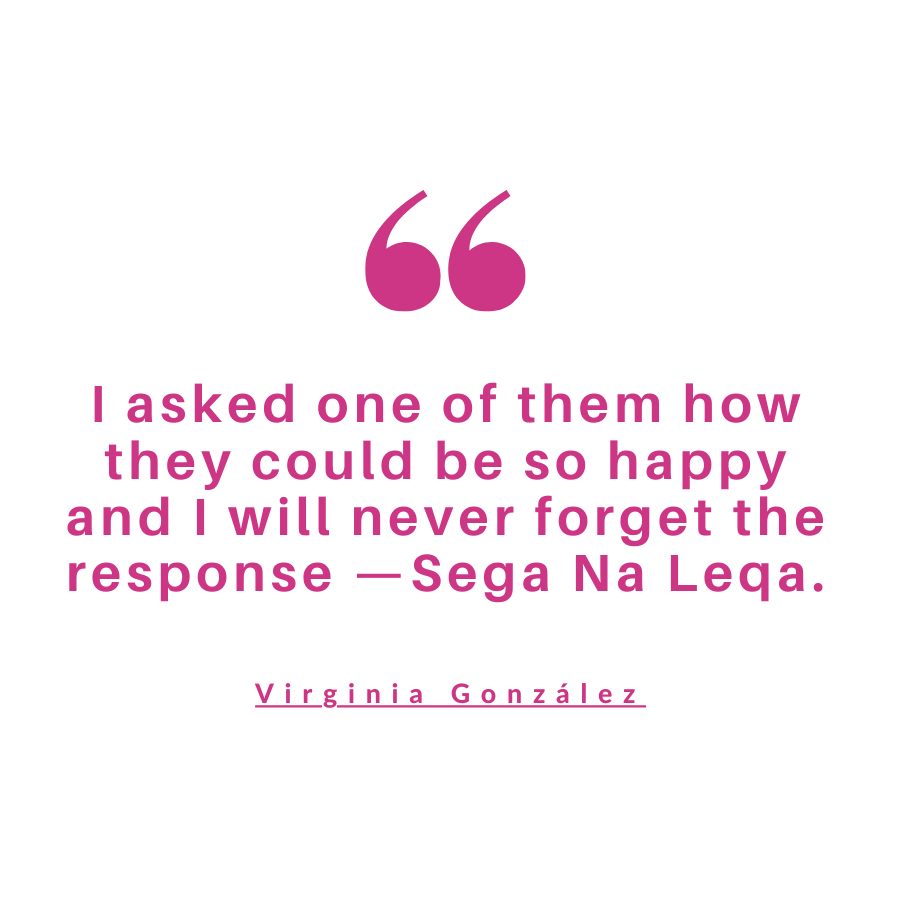 I would like to stop here just to mention that before that trip I was living at home, with my parents who took great care of me. The only duties I had were to study during the day and go out with friends during the night — as if that part was a chore! But now, here I was on a very far away island, surrounded by English speakers and waking up at 6 am in order to work on a farm!

That day we worked 9 hours with a few “smokos” in-between — Smoke, coffee, and rest breaks. When we finished, I was exhausted and asking myself what on earth was I thinking! And then I saw the Fijian group laughing and chatting. I asked them how they could be so happy and I will never forget the response — “Sega Na Leqa” — the Fijian equivalent of Hakuna Matata (no worries).

After completing my time on the farm, I had a few more working experiences. One of the most significant ones was working in a supermarket. This was impactful to me in two significant ways: 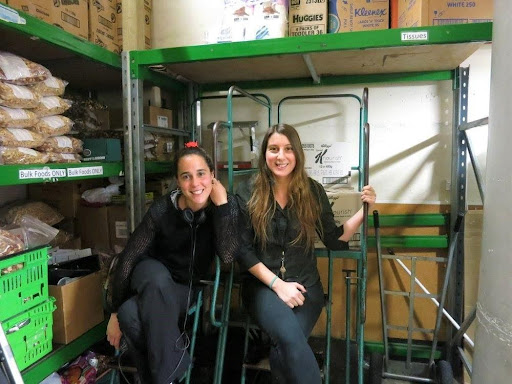 At that point, I had been in the country for 4 months and my English was no better than when I had arrived. One of the main reasons was that I used to hang out with a lot of Spanish speakers.

I had promised myself that in the supermarket I was going to start brushing up on my English skills for real. I started as a grocery assistant, a position where you need to use a pitchfork all the time to open boxes and fill the empty shells. It sounds boring and tough, doesn’t it? However, it was the best job I have ever had!

In order to accomplish my goal, I did my best to distance myself from other Latinos and instead worked to get closer to Kiwis. 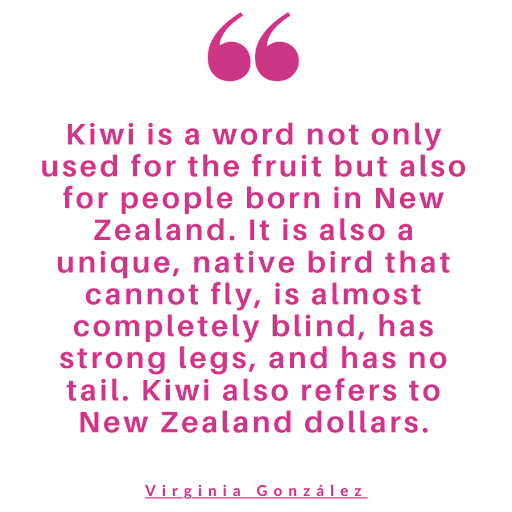 I would like to make another brief comment on the word Kiwi before going on — Kiwi is a word not only used for the fruit but also for people born in New Zealand. It is also a unique, native bird that cannot fly, is almost completely blind, has strong legs, and have no tail. Kiwi also refers to New Zealand dollars. 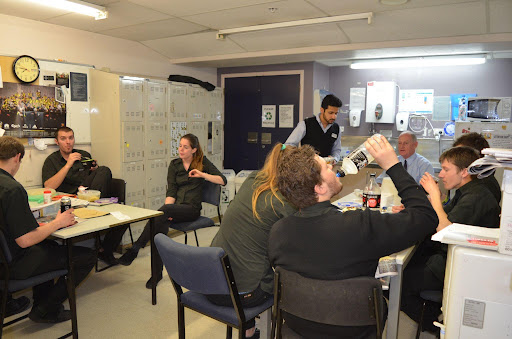 Here we are, enjoying a lunchroom break

At the supermarket, we had a lunchroom with two tables, one where all the Latinos usually sat and the other one was a mixture. I started sitting at the second one and remember doing this for at least a month just listening to the English speakers, trying to understand what they were talking about. A few weeks later, I started laughing at their jokes and I was able to follow the conversations. I even started replying to some comments. Until one day — which I remember vividly — we went out for drinks, and after a couple of them, I just let the English words pour out from my mouth! 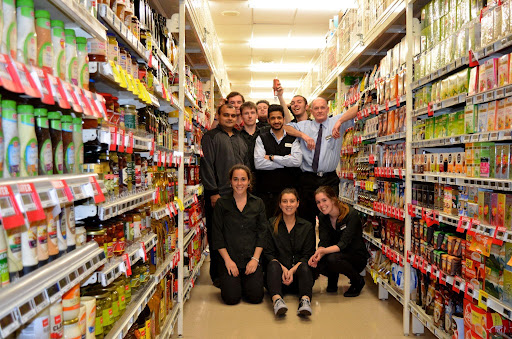 My grocery store colleagues and I

That was the beginning of the new me, speaking a new language. I cannot remember anything more exciting and rewarding than when you realize that you are finally able to have a full conversation in a second language after so much time. Of course, that was only the starting point but it already felt empowering. Thanks to this, I could now make a lot of new friends not only in the supermarket but also out there in the world. Since so many others had at minimum, working knowledge of English, I could finally talk with the Samoans, the Sri Lankans, the Indians, the Chinese, and the Kiwis just to mention a few.

Tune In Next Month for Part TWO

There is not enough space in this short article to tell you all about my experiences in this amazing country that will always have a special place in my heart. That is why I have decided to continue in the next article, describing in-depth, the amazing landscapes and different places you can find on both Islands — Yes, New Zealand comprises two main islands — the North and South islands).

I hope you have enjoyed these adventures so far, but we will see each other in the following article! Feel free to leave a message. We are more than happy to read about your experiences too or answer any questions.

If you liked this read, here is a link to Virginia’s previous article on her magical adventures to Misiones.

wpDiscuz
Share this ArticleLike this article? Email it to a friend!
Email sent!