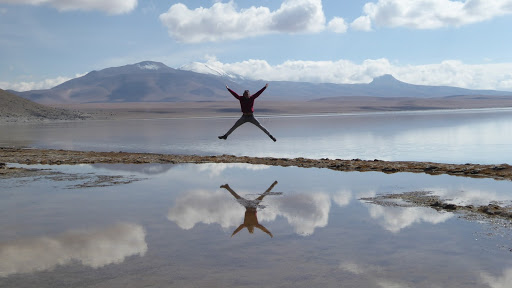 Allow Bolivia to Surprise you!

Bolivia, a beautiful country located in central South America, is home to part of the Andes Mountains, the Atacama Desert, and the Amazon Basin rainforest. It is simply a magnificent county to visit. As in most South American countries, Spanish is the most spoken language in Bolivia. However, in contrast to people in other Spanish-speaking countries, Bolivians still embrace their native dialects such as Quechua, Aymara, and Guaraní.

In 2006 something staggering happened in Bolivia an indigenous Aymara president was elected for the first time. And it was at that moment, that actions in defence and in vindication of indigenous people and their cultures began. Each small community started to exercise their own rights, which included speaking their own language freely. Bolivia is now known as a plurinational state. There are few examples of plurinational states around the world – which means that the administrative system is culturally heterogeneous because each group and social sector can participate.

Three years ago, I went to Bolivia and spent a month roaming around. If I had to describe my experience using just one word, it would definitely be “surprising.” Read on to see why.

Everything began with the first three day-tour through the Bolivian Altiplano. I was in Chile, at the Atacama Desert where I hired a van that was going to take me to Uyuni Town (Bolivia). During the ride I was delighted by spectacular views and enjoyed being in contact with pure nature. Six people, accompanied by the local driver, were allowed per van. We hopped into the car and started driving directly into the desert. There were no actual “roads” or signs, but carprints on the sand that the drivers could follow thanks to their experience.The video below shows the first stop. There was a limitless lake that resembled a mirror, together with snow covering the top of the mountains which seemed to blend in with the clouds in the sky. It was synonymous with experiencing a peaceful sensation of freshness.

We spent the first night – in line with the adventure – in the middle of nowhere, sharing rooms with the members of the van in an old building. We were enclosed by the stars and the immense silence you can only find when you are all alone and far away from the hustle and bustle of city life.

The Weather Conditions and the Outcome

Shortly after arriving, at least half of the travellers of the main group were feeling sick – very common happening due to the weather conditions. The Bolivian Altiplano altitudes range from 2400 meters above sea level (7.874 feet) to over 4.900 meters (16.076 feet). This meant that apart from being freezing cold, we also had to struggle with the usual discomforts that heights can cause in those who are not used to them. Stomach aches, strong headaches, and stronger heart beats are the most common symptoms. Luckily, I was feeling well, maybe because I used to hike in high mountains with my family when I was a little girl. But most likely, all the credits should go to the fact that I spent most of the day chewing coca leaves.

Coca leaves have been used for the last five thousand years by the Altiplanic Aboriginal communities. You may not have heard about it, but it is a really common practice, not only in Bolivia but also in Colombia, Perú, Ecuador, Argentina, and Chile. The locals chew those leaves all the time. It looks as if they were holding a small balloon inside their mouths and is quite an eye-catching image. Some other tips and tricks to keep in mind in order to prevent these illnesses include drinking water before being thirsty, eating lightly before feeling hungry, and most importantly doing everything calmly.

Getting Closer to Uyuni Salt Flats

On the second day, we went first to Thermal Waters surrounded by a crystal clear lagoon, and then to The Geysers. During the second stop I found myself surrounded by quite a scene – it smelled like sulphur, and there were grey, reddish and yellow rocks, water vapor, and hot clouds of steam between ten to fifty meters high. At that time, I did not know that I had to be really careful with what I learned was in front of me  –  boiling lava! Watch the video to see what I mean.

Even though each stop until that point had been incredible, we were all waiting for the last day as we were going to Uyuni Salt Flats. The second night we were lucky. We slept in a hotel made of salt with hot water and Wi-Fi! The following day we woke up early enough to encounter the main attraction.

The Uyuni Salt Flats are endless due to the fact that it is the largest, continuous, high Salt Desert in the entire world. The covered surface is 10.582n km² (6.575 miles). The best part came when the sun rose and the morning started to clear out warming us up. It was an unforgettably magical moment that only lasted a few seconds. Later on, we drove into a place where people usually take funny and creative pictures which can be found on the Net.

Our Adventures Ends in Uyuni City

I was exhausted when the trip finished in Uyuni city, but it was absolutely worth it. Even to this day, it has been one of the most remarkable views I have ever seen. I hope you have enjoyed joining me in this short Bolivian adventure. There is much more to see and learn about this country. Maybe one day, if you feel like visiting beyond a virtual tour, I’ll see you there!