Amsterdam — One of the Most Cultural Cities in the World! 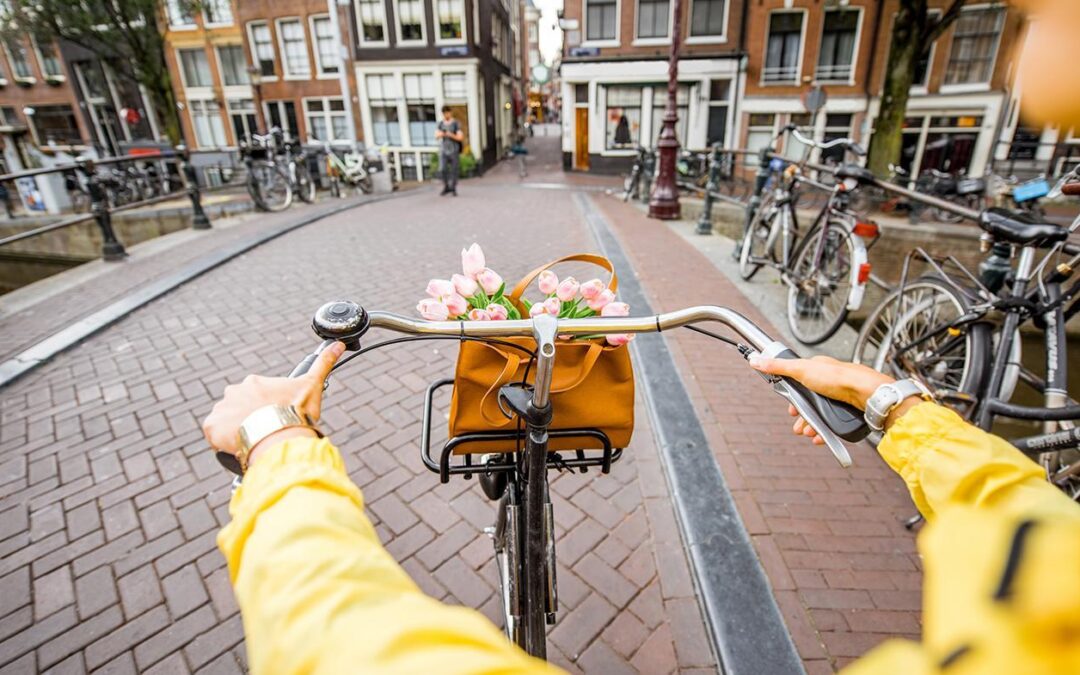 One of the Most Cultural Cities in the World – Amsterdam

Some Interesting Facts about Amsterdam Languages

Amsterdam is one of the world’s most cultural cities and the capital of the Netherlands (“Neerlandés” or Dutch is this country’s official language). Dutch is one of the closest relatives of both German and English – the funny thing is that neither German nor English speakers can easily understand when someone is speaking Dutch. In contrast to what most people think, Neerlandés is spoken not only in the Netherlands but also in Belgium, where almost 60% of the population uses it. It is also the native language of the majority of Suriname population – a South American country – and it is also official in some Caribbean Islands such as Aruba, Curacao, and Sint Maarten, which are constituent countries of the Kingdom of the Netherlands.

In the following graph, we can see this information embodied in numbers. 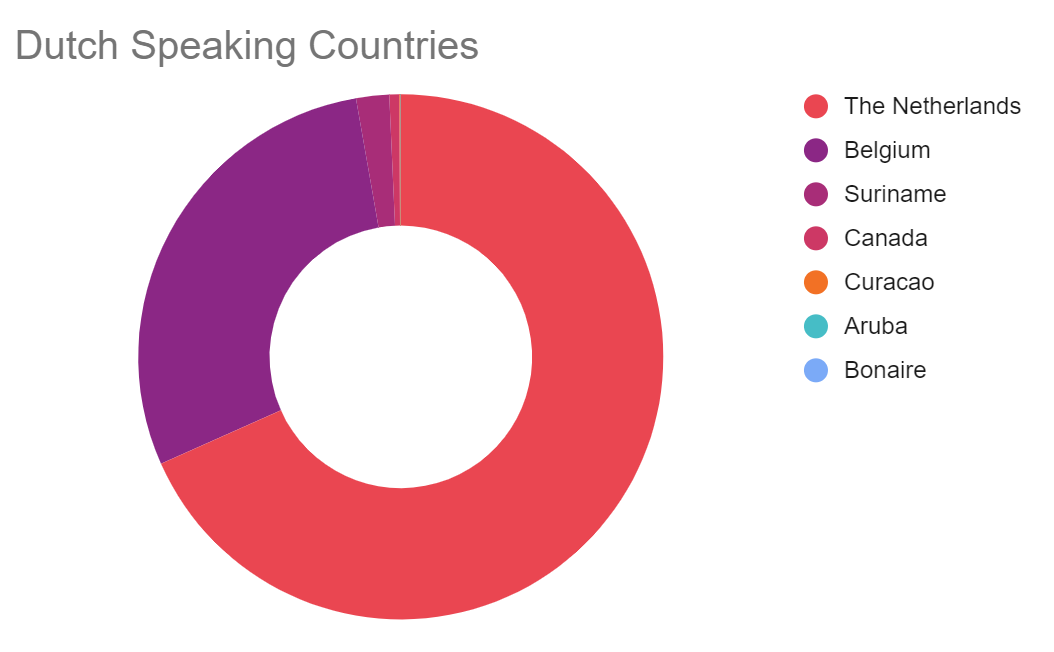 The Most Cultural City Per Capita 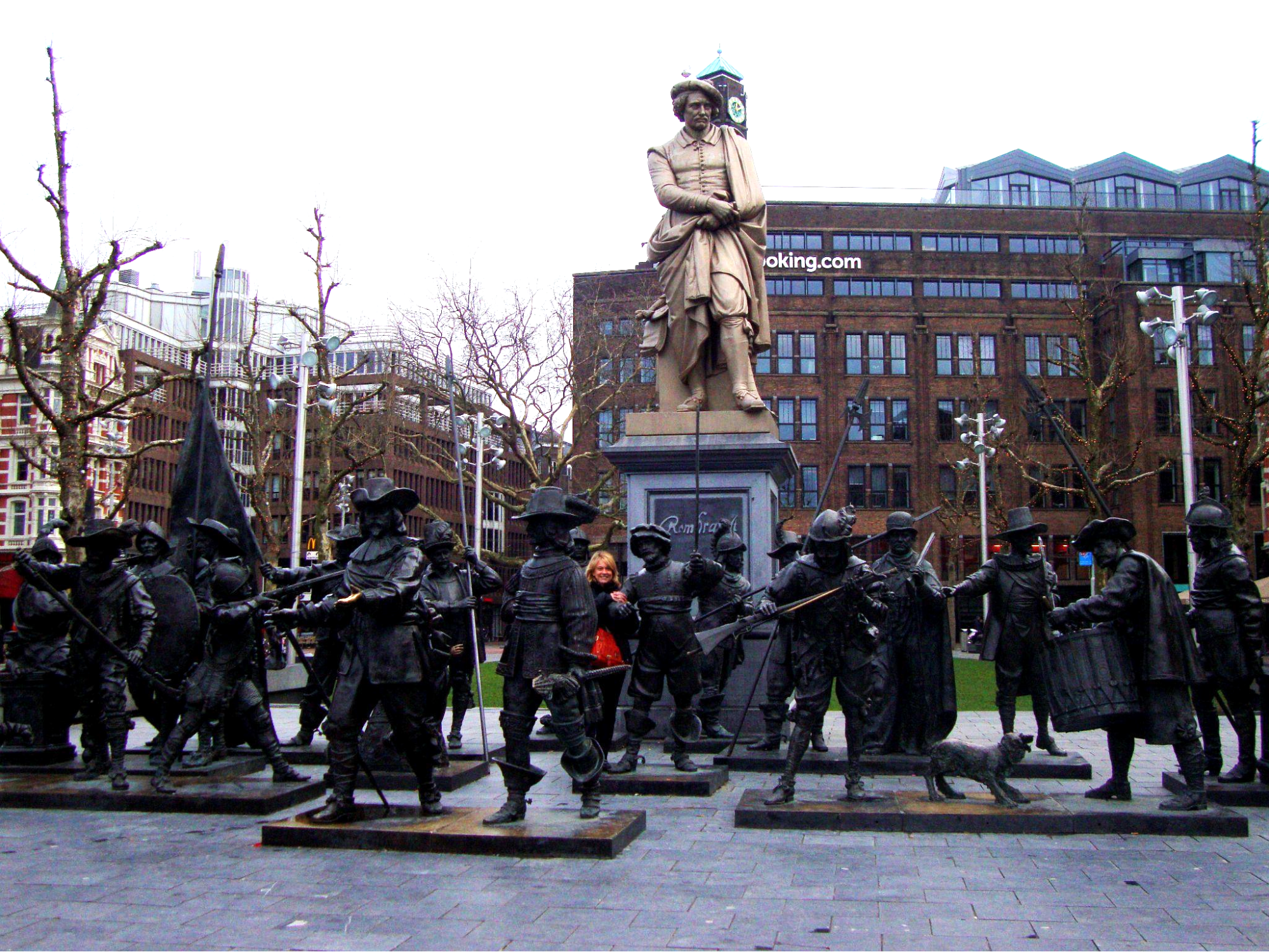 *Where’s Virginia’s mum? She is on Rembrandt Square, where you can see the famous Dutch painter in the main statue.

A ranking made by Totallymoney reveals that Amsterdam is the city with the most cultural attractions. Of course, the size of the city and the number of citizenships has helped. However, there are a considerable number of theatres, museums, art galleries, world heritage Sites, concert halls, and Michelin-starred restaurants to visit. And not only that but also the canals, the red light neighborhood, and the number of people driving bikes everywhere are attractions not to be missed.

Some of the most famous museums and theaters we could mention are the Rijksmuseum, Van Gogh, Madame Tussauds, RAI Amsterdam Theater, and Ana’s Frank museum, among others. This last one is very connected to my story and how I got to go to Amsterdam for the first time. If you are curious, you will be glad to keep reading this article.

A free Ticket to Amsterdam 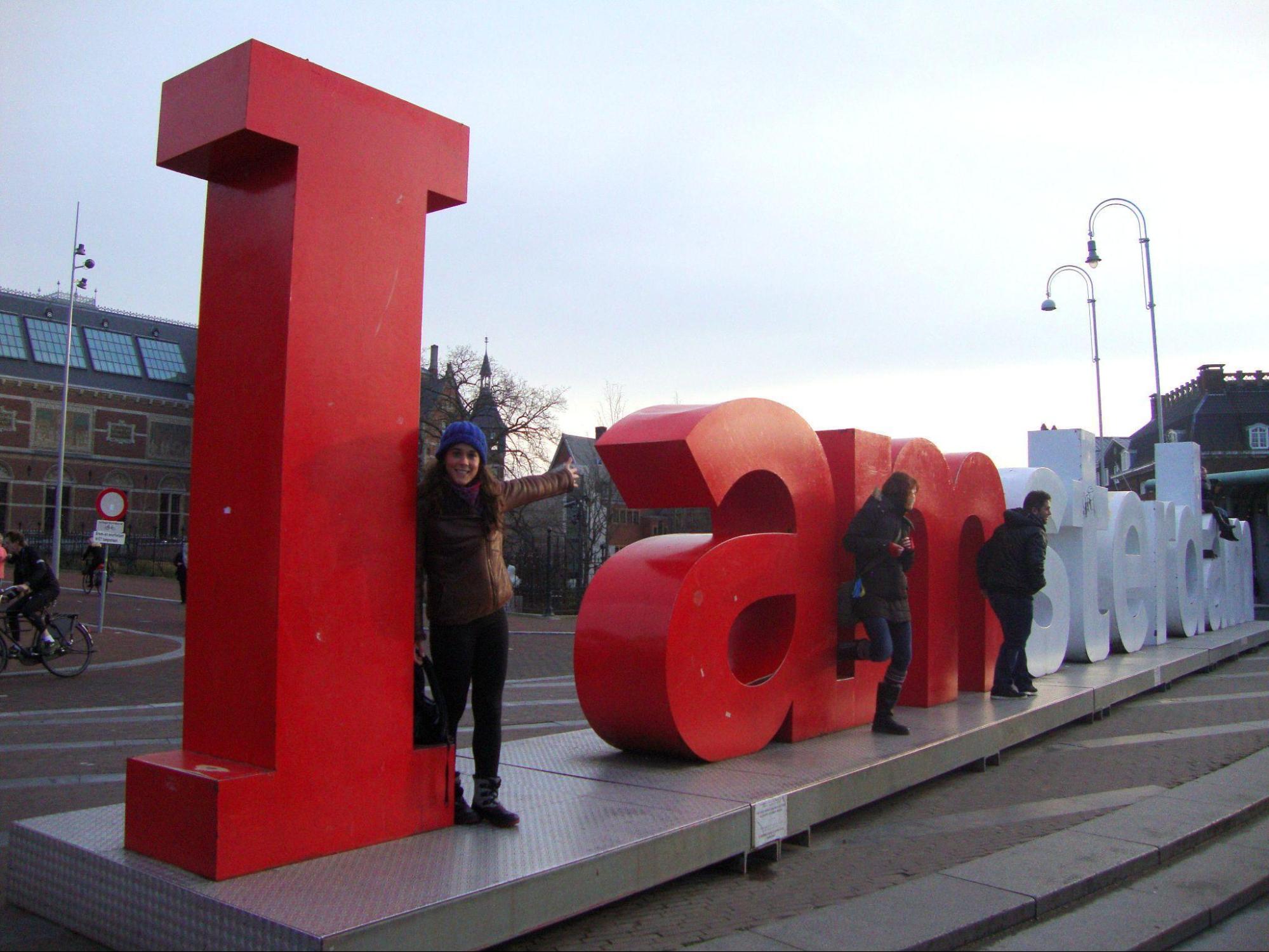 I can tell that I am a very lucky person. Seven years ago, I received a call from someone telling me that I had won a flight ticket to Amsterdam. Can you believe it? I could not; for many days, I was in shock.

It became my first European destination. Before, I had only traveled to Uruguay and Brazil. It was an amazing surprise. At the time, I felt I did not choose the destination, but the destination had chosen me. And this is something I wrote about in my last article, in which I describe how my Russian friend Ekaterina felt the same when deciding to travel to Argentina.

Have you ever had that feeling?

Let me start from the beginning, which dates back to 2013 when my best friend invited me to visit Buenos Aires as her family was living there. Her grandma is such a sweet lady, she gave us tickets to the typical city tour on the red buses. We did not lose our time and spent it traveling around the city.

After a few days, we decided to spend one day together with my friend’s grandma. We went to Ana’s Frank museum, and to thank her I bought the tickets for the three of us. Even though I had very little money back then, I remember that I wanted to return at least something of what I had received. And maybe you can already figure out why I’m telling you all this.

In short, when the museum visit finished, our guide invited us to participate in a drawing. And yes, as you might have guessed, the call I received a few months later was from there – I had WON the flight tickets and the entry to the original Ana’s Frank museum in Amsterdam. 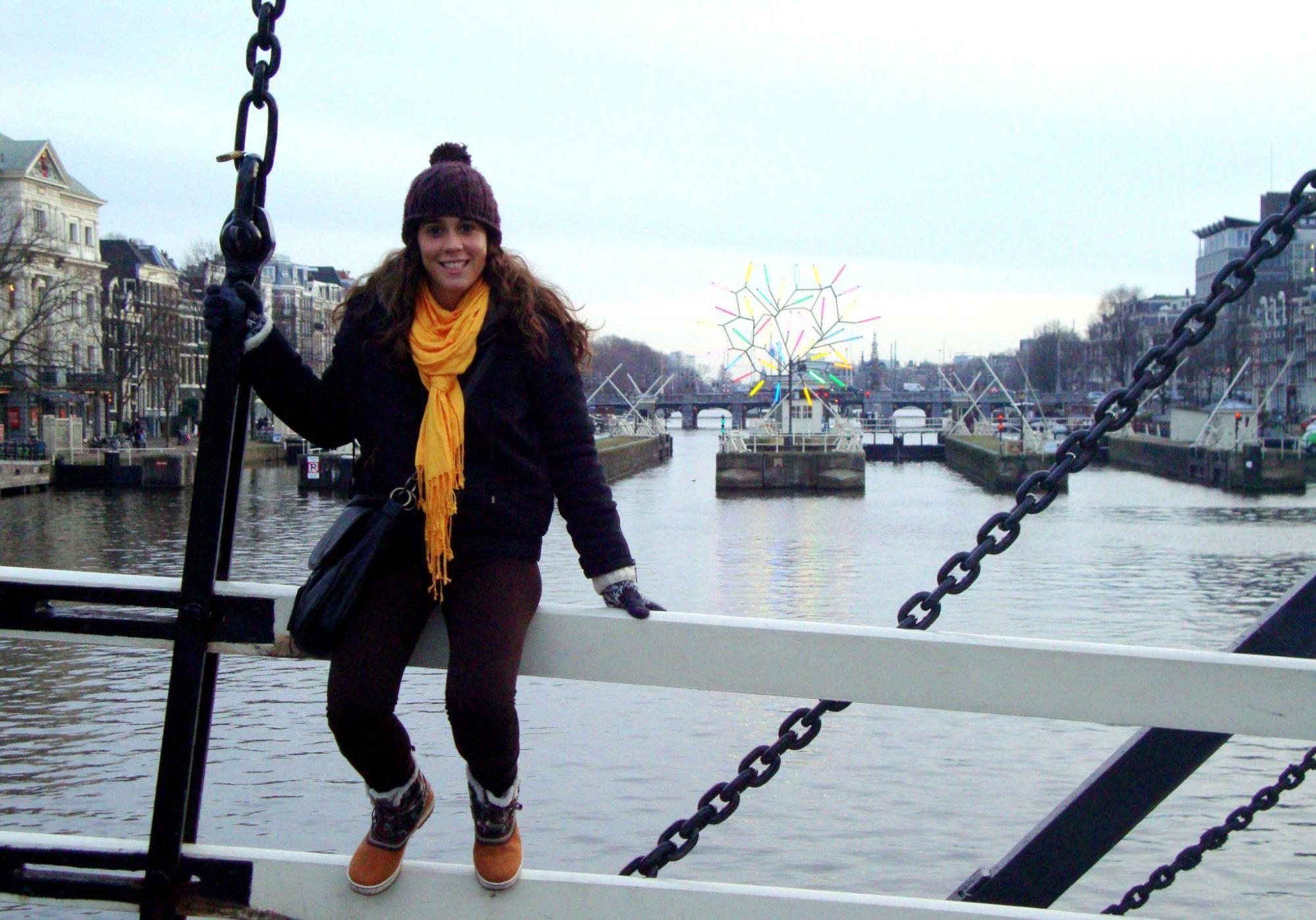 As I said before, this was my first “big” destination; maybe for that reason, I remember Amsterdam magically and amazingly. Also, I ended up traveling with my mother, who was very scared of me traveling alone to the Red Light district.

We booked a hotel near the Amstel river, where we arrived after a very long and exhausting walk for two main reasons. We decided to take a very big suitcase, 23 kilos each, for a 14 days trip. By then I thought I needed to take EVERYTHING with me just in case! I remember having the feeling that I needed to be prepared for every situation – come rain or shine.

We did not consider the weight of the suitcase when we decided to walk to the hotel after arriving at Amsterdam Central Station. Can you imagine both of us with those big suitcases with wheels on the cobblestone coming and going while laughing out loud because the numbers on the street made no sense to us and we could not figure out where to go?. In Argentina, you usually have all the part numbers on one side of the street and the impairs on the other. And here it was impossible to understand until a generous lady explained how to reach the place. It is not minor to mention that there were no GPS smartphones back then. Such a memorable experience it was!

We spent a few amazing days walking around, visiting museums, tasting new food, and enjoying the time together. I like that Amsterdam was a surprise to me and how in the end, we end up traveling with my mother without really having that in our plans. And that is something I took as a life lesson – allow life to surprise you with new ideas, new friends, invitations, and new places that are not in our plans.

I would like to know if you had won a free ticket or anything that invited you into a new adventure/experience?

If you liked this read, here is a link to Virginia’s previous article on her magical adventures in Buenos Aires.

Share this ArticleLike this article? Email it to a friend!
Email sent!