As the seventh largest country by area, India is quickly emerging as a promising localization market. But the Indian market is complex. Although there are 22 constitutionally-recognized (national) languages in India, there are 122 major languages altogether resulting in well over 2,000 dialects spoken by the country’s 1.25 billion people: 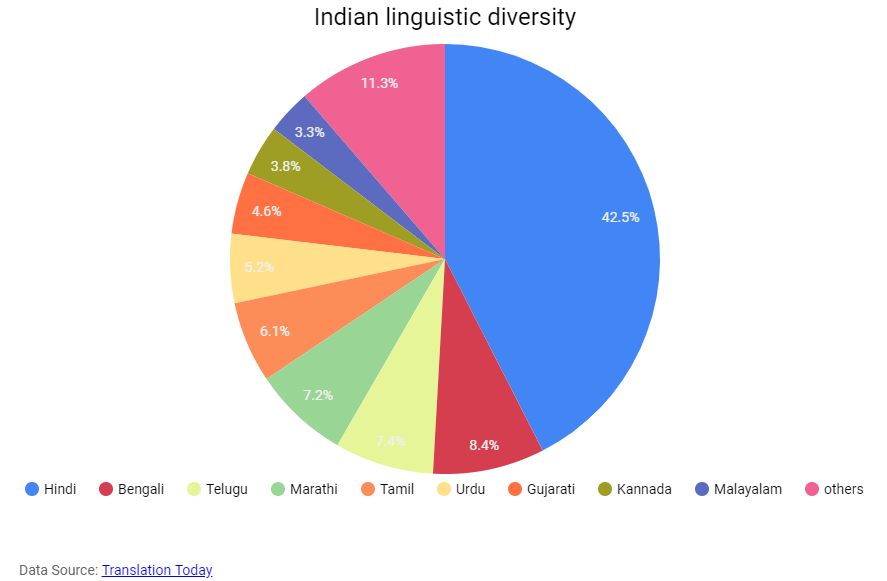 As of 2014, there were 243 million Indians actively online, directly behind China and the United States. And although this sounds impressive, it represents just under 20 percent of the country’s total population. Another challenge is the language of the Internet. English remains the dominant internet language but only 10 percent of the total Indian population are able to communicate in English.

In order to bring this sprawling digital divide to a halt, the Government of India began the Technology Development for Indian Languages (TDIL) way back in the early 1990s. Its aim is to develop IT tools in local languages within India. Partnering with technology organizations, TDIL continues to develop Indian language computing resources, processing systems, tools, translation support systems, and localization of software.

In 2008, the government launched the National Translation mission (NTM) with the aim to establish translation as a recognized industry in India. Unfortunately however, efforts have not stayed consistent throughout the years, and as a result, the industry remains fragmented. Low penetration of computers, limited access to the Internet, low availability of local language content, a lack of formal language-based IT training, and a lack of accreditation and formal training for translators continue to daunt the Indian language services industry.

Nonetheless, Lionbridge, the largest global language service provider, has recently expanded its in-country experts within India. The company’s in-house translators are now able to cover more than 95 percent of India’s language population. Perhaps Lionbridge is readying itself for the exciting prospects of India becoming a new international manufacturing hub.

The “Make in India” initiative which launched in 2014, is a formal invitation to global markets, encouraging international companies to consider India as a potential manufacturing hub. Four elements are key to successful manufacturing hubs, and India seems to hit the mark on each one:

“More than 12 million youth between 15 and 29 years of age are expected to enter India’s labor force every year for the next two decades.” Through the National Skill Development Mission, the Indian government is increasing the number of skill development centers which will likely produce a growing, capable workforce able to handle increased business opportunities.

Traditionally, India’s infrastructure has been characterized as insufficient for international business. However, the Indian government, as well as private equity and venture capital investments have initiated a number of promising policies. With plans to build and improve power, bridges, dams, roads, highways, roads, ports, and rails, India’s infrastructure is beginning to show promise.

The World Bank’s (WBG) most recent Doing Business Report (DBR) has moved India up 23 position points against its 2017 ranking. It now ranks 77th out of the 190 countries assessed by the WBG. As if this isn’t already impressive enough, the year before, the WBG moved up India’s positioning by 30 places – no easy feat for a country as large and as diverse as India.

Although India continues to face a lot of upward battles when it comes to standardizing their language services industry, significant strides are being made. Thanks to both private investments and government initiatives, India is emerging as a desirable hub for LSPs. A talented pool of multilingual language specialists and IT engineers, competitive wages, and affordable real estate are just some of the reasons why LSPs are beginning to look toward India as the land of opportunity.

The Business of Marketing

My journey towards working in language services began in the food & agriculture industry. I have always wanted to be a food writer, and made a determined effort to work throughout the different links of the food chain: on sheep and goat farms in Barbados and Ireland, in various restaurants and food security nonprofits in Boston, and finally as a Peace Corps: Panamá Volunteer focusing on sustainable agricultural systems. It was in this role that I had my first experience as an interpreter/translator, using my Spanish language skills to help complete a vital bridge construction project in my community in Panamá. There was a moment when I felt my brain working simultaneously in Spanish and English, directing linguistic traffic, and I knew that I wanted to work as an interpreter. Upon completing my Peace Corps service, I moved to Panamá City, Panamá to continue my bilingual adventures, and to share them with you. Thanks for reading!

I was raised by a Spanish mother and an Irish father in a bilingual household, in the bicultural Basque Country of Spain. During my childhood I was exposed to different cultures and have always been inexorably drawn to languages and travelling. In Ireland, I studied French and Russian at Trinity College Dublin and graduated with a Masters degree in Translation Studies (Spanish and French) from DCU. I also speak French fluently, Russian, Basque, and some Polish. I started my career as an English technical writer, specializing in eLearning and computer-based training, but while living and working in the USA I found my way back to the world of translation and localization and have never looked back. Whether translating or writing, searching for the right word to express a thought or concept in Spanish or English is a challenge I still thoroughly enjoy.

I have written ever since I can remember. As a child, I found in words an excellent way of expressing my feelings and thoughts. 7 years ago I had my first “formal” opportunity writing in Spanish for an Argentinian enterprise. At the same time, I started traveling and have visited New Zealand, Australia, and different parts of Europe and South America. My most recent trip was to Bali. Three years ago I started working for a European tourism company where I offered my customer services and writing services in both Spanish and English. Now with GIM Writing services I will happily combine my two passions: writing about my travel experiences while honoring the many cultures and languages of the world!