Cultural and linguistic diversity in New York City is alive and well.

Recent data from the Census Bureau’s American Community Survey revealed that as little as 51 percent of New Yorkers speak English at home. Not surprisingly, Spanish is the second most commonly spoken language. It is spoken at home by nearly 25 percent of New Yorkers, amounting to roughly 1.87 million people. In fact, New York is home to as many as 800 languages and is often referred to as the world’s most linguistically diverse cities — and it is for this very reason, that I feel right at home. 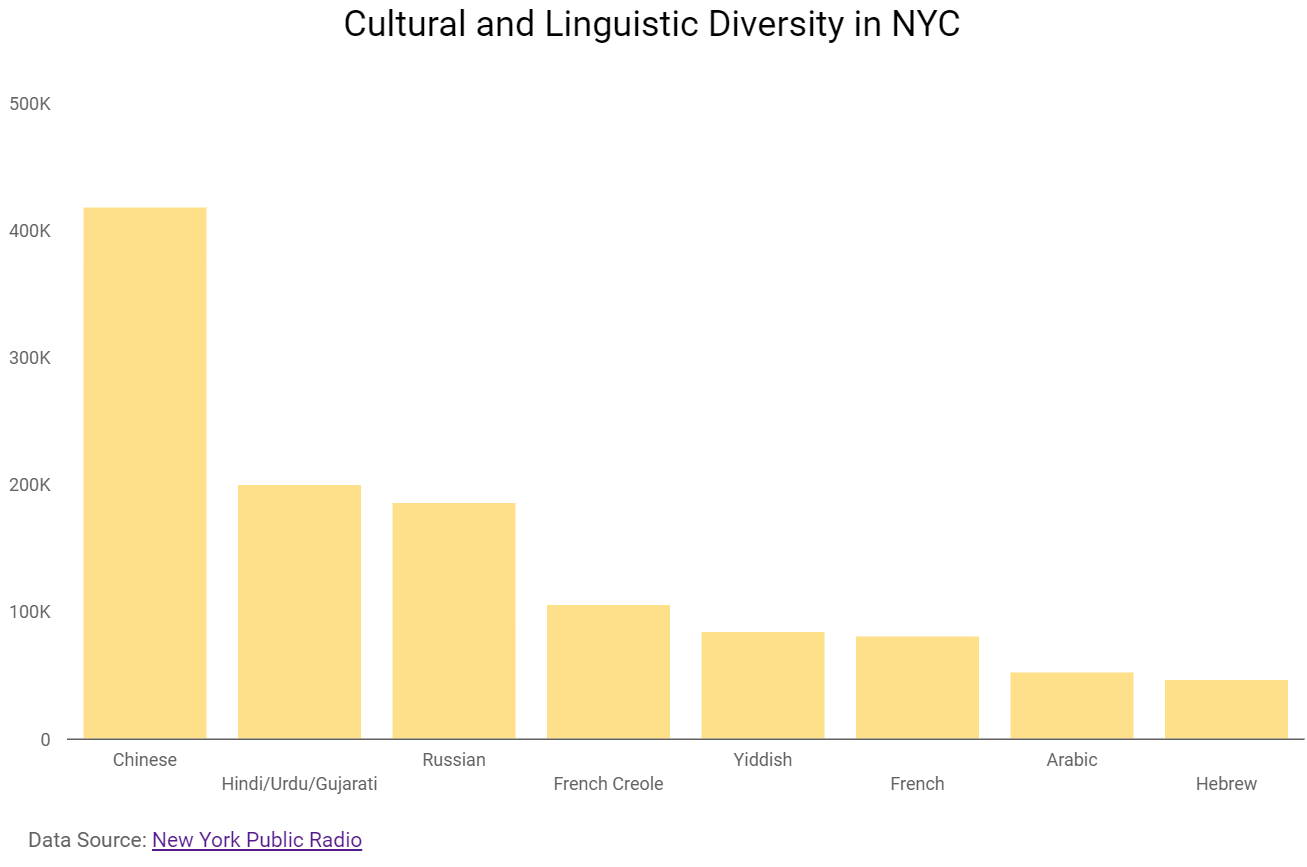 A Love Story That Never Ends

What a trip. I mean that in the literal and the figurative sense.

My two eldest daughters have recently relocated to New York City. They have a beautiful apartment in Harlem, and are just starting to settle in. Here in upstate New York, I’ve been caring for my eldest daughter’s dog (and “my” baby grand!), Daisy, a beautiful, spirited 11-year old cocker spaniel. 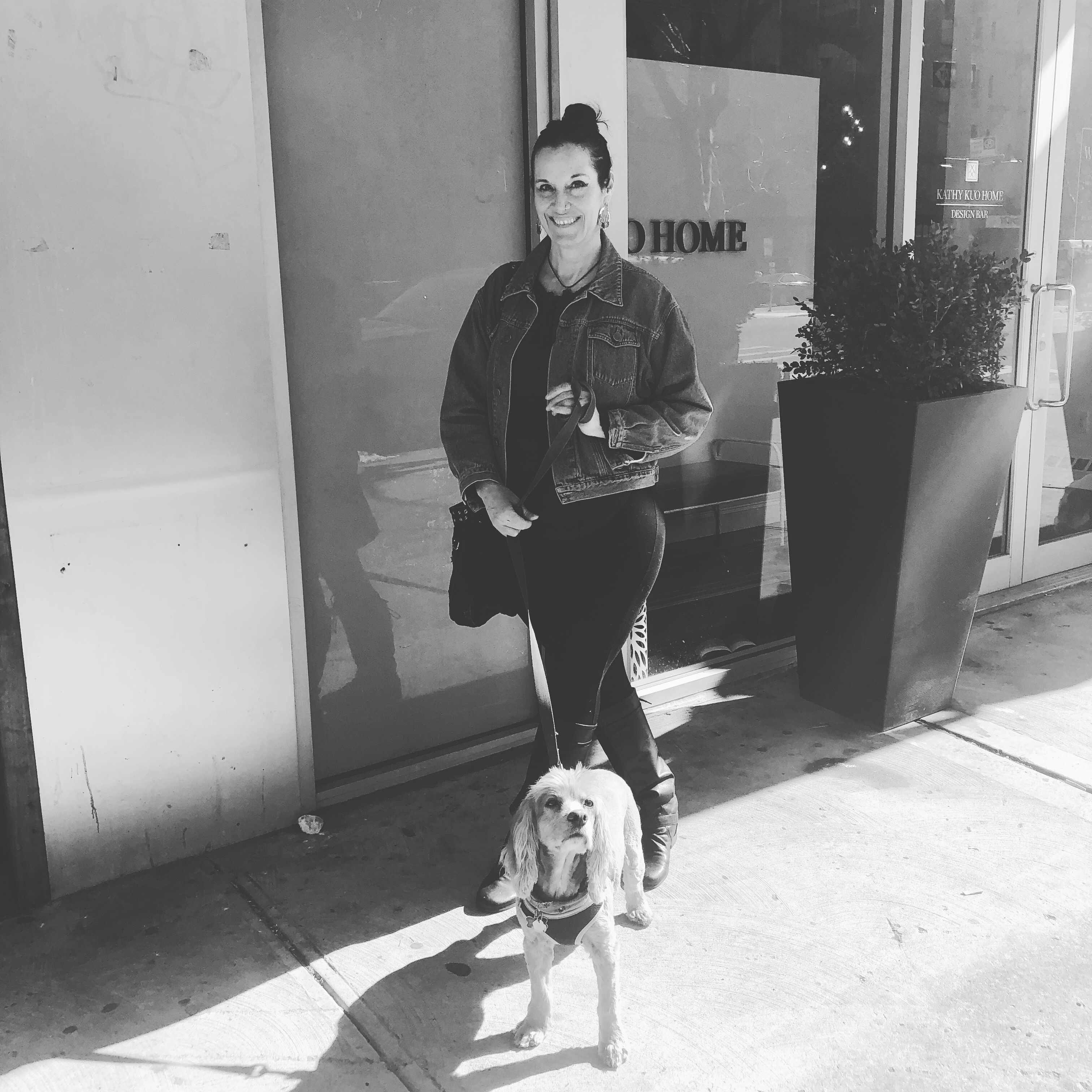 Last weekend, my youngest daughter and I rented an SUV, threw some clothes in a bag, packed up the Duke (Daisy), and headed down to NYC for the big mommy-doggy reunion. And once again, the Big Apple didn’t disappoint. There is something about this city that puts a skip in my step each and every time I visit. It isn’t just the hustle and bustle. It isn’t just the city streets, the cars honking, or the delectable food smells floating through the air. Nope. It’s the people.

In a one-block radius of my daughters’ apartment, I must have been greeted by two dozen or more folks. They don’t say, “hello” out of sheer obligation because we just happen to be temporarily sharing the same intimate sidewalk space as we brush by one another. They genuinely engage, look at you square in the face, smile, and say, “hello.” But it’s rarely just a “hello.” It’s often, a “that’s a spunky dog you have there!”, or a “your smile just brightened my day!” kind of greeting. Yes, there are flirts. Many, many flirts. And there are characters. Man, are there characters.

We arrived on Friday afternoon and naturally, I decided to take the Duke for a walk before my daughter got home from work. There was a man on the corner, sitting on his motorcycle, blasting James Brown. He was just grooving to the music as his friends came and went. He caught me smiling at him, so he did a little dance for me without moving off of his bike:

On the next corner, a man had his market set up with fresh fruits and vegetables, speaking with a small group of people in what sounded to me like the Arabic language. Mother Nature’s vibrant reds, yellows, blues, oranges, and greens filled his stand while passersby stopped, shopped, exchanged a few formalities, then kept it moving.

It was a busy Friday afternoon on the streets of Harlem, as people walked by in both directions, speaking any number of different languages. The streets were alive with music, talking, laughing, cars racing by, cyclists yelling to move to the side – and did I mention the smells of food pouring out of street trucks and nearby restaurants? Ah, I was in my glory. 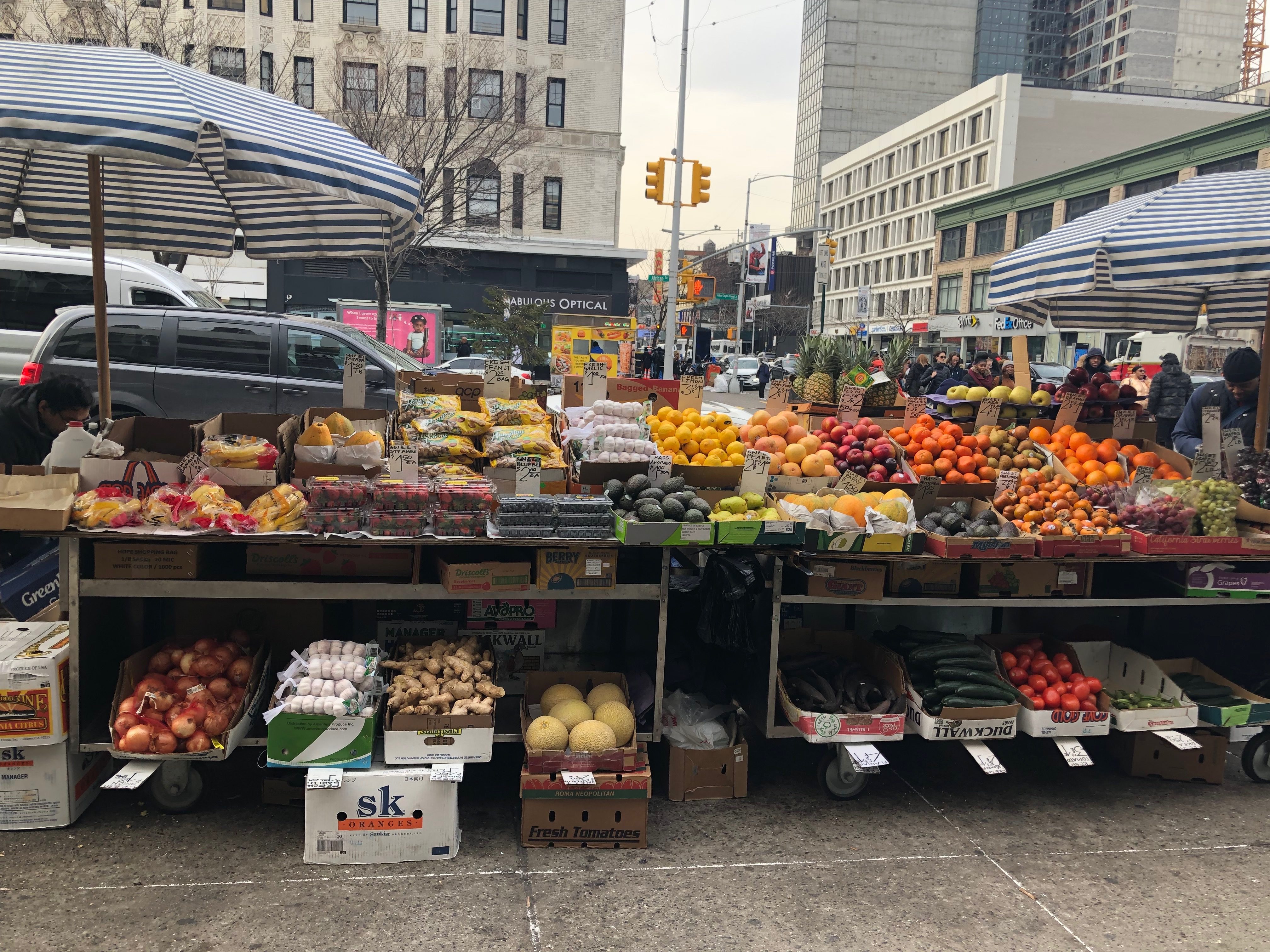 On Saturday late morning, I made my way on the subway to Brooklyn to meet a friend of mine. It was freezing cold and pouring rain. It took me three transfers to find Rachael but that is all part of the New York adventure, and I love it. We met at a very charming Italian café on Manhattan Avenue called, Lella Alimenti. The café was packed and the noise was that perfect buzzing sound that lets your senses know you are right at home. Rachael told me that this was an authentic Italian café and that I would love the food – and naturally, I did.

Within an hour, my three daughters joined us as well, and it just made the experience that much more enjoyable. I also happened to notice that the young gentleman who served us not only supported a strong Italian accent but man, was he a looker! You know, that kind of adorable expression with puppy dog eyes, coupled with a beyond charming personality. He was the kind of person who again, looks directly at the person with whom he is engaging, and he does so with an authentic smile on his face. Needless to say, I was so charmed by this young man that I had to speak Italian to him when we left.

No. I don’t speak Italian. My father’s father was from Sicily and he spoke Italian. Two of my father’s sisters speak Italian as well. When I was a very little girl, I too wanted to follow my Italian roots so I went to Italian school on the weekends, but I quit much too soon. I was quite young and impressionable, and all the other kids came from Italian speaking homes. So, when I tried to speak and use what little vocabulary I had learned, they would giggle. Not out of spite, but just because I was placing emphasis on the wrong syllables. Italian words are awfully multi-syllabic so I’m sure it sounded quite funny to them. Anyway, after this happened repeatedly, I felt discouraged as though I just wouldn’t be able conquer it, and I gave up. Pity. It’s such a beautiful language and part of my family history. I guess it’s never too late though.

Back to the handsome Italian man in the café. We cleared off our breakfast plates, and started to make our way toward the exit. I couldn’t help myself. I fully believe that if you have something kind to say to someone, you should say it. Sometimes a person really needs a compliment, so why would you hold back? So, I sauntered up to the counter, mustered up the courage, leaned over so he could hear me, and said:

And with a genuine smile, he responded with the sweetest,

Rachael and Carreen at Lella Alimenti 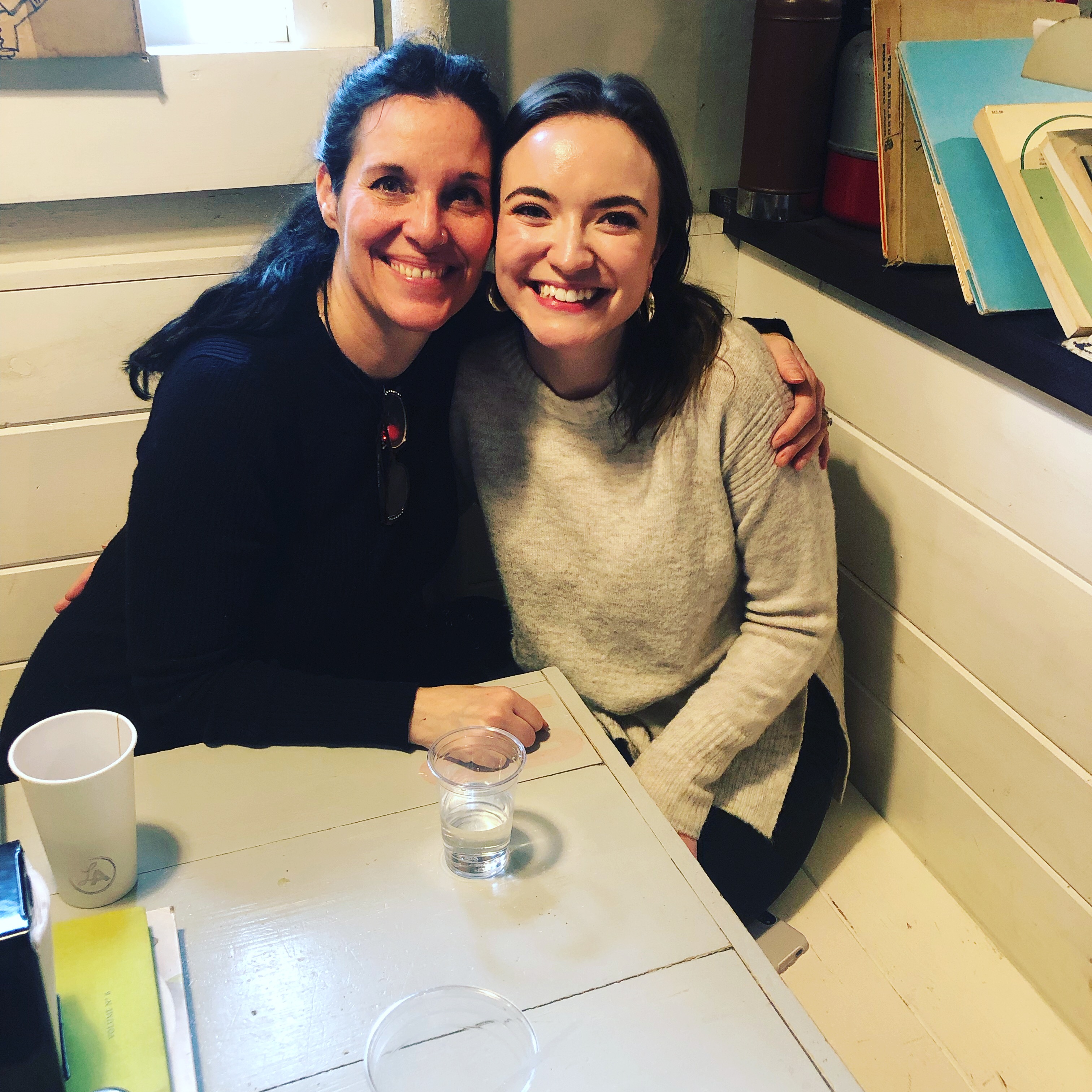 On the C Train

For the rest of the day, my daughters and I toured different areas of the city. We walked across the Brooklyn Bridge, went for a delicious dinner at a Mediterranean restaurant in the Chelsea area, then wandered in and out of some sweet shops and thrift stores.

As we made our way around the city from subway to subway, we started talking to a group of musicians who play the hand drums on the C train. As we were exchanging pleasantries, another gentleman made his way over and began to talk with us. It was clear that he was not fluent in English but he tried his best, and wow, did he have a smile! Whether you believe it or not, a person’s smile reveals so much. This man’s smile was beyond authentic and kind. He just genuinely wanted to be a part of the conversation, and so naturally, he was.

We all got on the C train together and had the pleasure of listening to the musicians perform. Before we knew it though, they were jumping off the train to run to their next location. The other gentleman and I however, drummed up a conversation of our own. Our small talk soon revealed that he was in the city visiting his girlfriend, and that he was Franco-Dominican living in Montreal. So, you know what’s coming. Yes, the French chatter began!

My second language is French. I grew up speaking French and every single chance I get to speak, I speak. So, we gabbed about my daughters, what they are doing in NYC, where they were born, his girlfriend, and what it must be like to travel back and forth between Montreal and NYC. My eldest daughter is working hard to gain back the French she had learned as a small child, so she too, added her French flair to the conversation. We gabbed and gabbed and gabbed, until it was time for us to say goodbye.

New York City, I Love You

As all love stories go, this one too sadly came to an end. Before we knew it, my youngest daughter and I were back in our rented vehicle, heading over the George Washington Bridge, then northwest for six hours, straight back to Buffalo. This love story might have had to end, but it won’t be the last. Now that two of my daughters have moved to New York, I’ll have the chance to visit much more often. And each time I do, I’m quite sure that I’ll fall in love all over again, for the first time.

New York City, I love you.