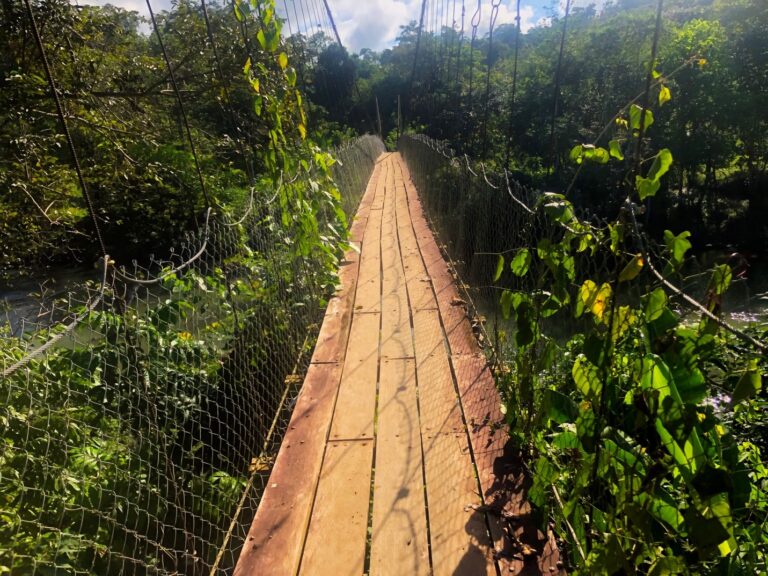 The Education of a Field Interpreter

The Bridge from Biloxi

Mr. Mitchell, the tall, soft-spoken southern gentleman, checked his watch and looked up at the approaching storm clouds. Having had an illustrious career as a civil engineer, he dedicates his time and expertise to international development work as the president of the Mississippi Gulf Coast chapter of Engineers Without Borders (EWB). After completing a well-digging project in southern Zambia, the group turned its attention to building a much-needed bridge in the small, rural community of Boca de Cuiria, Panamá. To put this into perspective, this is a community of 150 people surrounded by rivers and governed by the rain – a community that I called home. For two years, I lived in Boca de Cuiria, serving as a Peace Corps Volunteer. I worked alongside the people of this community, learning their language and culture and getting to know them personally.

“Ah yes, this must be the village elder,” Mr. Mitchell proclaimed as my bumbling, octogenarian neighbor Tomás tottered past us towards his house, intent on a long afternoon nap in his hammock. “Tell him to fetch as many horses as he can. We must be out of here before the rains come.” I knew that Tomás had neither horses nor any sort of authority. There wasn’t any real organizational structure in Boca de Cuiria, just 30 households subsisting off the land. The community had no “village elders”; however, these stereotypes of rural communities in the developing world continue to bedevil the field of international development, impeding the implementation of sustainable solutions. But on this particular day, I acted as an interpreter for Mr. Mitchell and the other engineers, so I diligently relayed the message. Tomás Villareta looked at me wide-eyed and confused.

To ease Tomás’s growing stress level, I decided I had better add, “Está bien, Tomás. No se preocupe…” (“it’s alright, Tomás. Don’t worry about it”).,  Tomás let out a sigh of relief, and promptly walked away in the direction of his hammock.

From my humble experience, an interpreter must be more than just a linguistic expert since the language barrier is only one of the challenges to overcome. The keys to being a good interpreter are cultural competency and interpersonal skills, which allow you to communicate across cultures and bridge the interpersonal gap. Fundamentally, interpreting brings together people from different cultures and ensures mutual understanding on an interpersonal level, replacing cultural barriers with global connections.

To examine interpreting through the lens of interpersonal relations, we must turn to John L. Wallen. Wallen dedicated his career to understanding the processes and malfunctions of communication, an almost mythical figure in social psychology. True to his principles but lacking in pragmatism, Wallen refused to publish his works, believing that “if his ideas [were] useful, they [would] spread through personalized channels of communication.”1His main contribution to the field of psycholinguistics is the theory of the interpersonal gap, which refers to the “lack of congruence”2 between the intentions of a speaker and the effect on the listener.

A basic conversation between two people consists of the following steps:

Step One: A private intention arises in Person 1.

Step Two: To communicate this intention to Person 2, Person 1 must encode that feeling into words.

Step Three: These words are spoken aloud, accompanied by a tone of voice and body language, becoming public.

Step Four: Person 2 receives those words and must decode them based on their unique lived experience.

Step Five: Person 2 is impacted by the words of Person 1, but that impact is private and unknowable to Person 1, unless communicated by Person 2. .

At every step in this interaction, there is the potential for miscommunication, a series of gaps between Person 1’s intentions and the impact on Person 2. One could misunderstand one’s private intentions or choose the wrong words or tone when trying to express them. Or, Person 2 could misinterpret the message encoded by Person 1, leading to unintended consequences. When two people communicate effectively, “the effect is what was intended, [and] the gap has been bridged. If the effect is the opposite of what was intended, the gap has become greater.”3

When communication must happen across languages, the unique skill set of an interpreter is required. To facilitate effective communication, an interpreter must not only break down the language barrier but also overcome the cultural divide and bridge the interpersonal gap.

“Tell them it’s still too watery – the cement is too watery. It needs to be strong – fuerte, fuerte.” Mr. Mitchell gestured with his biceps. A dozen men from the community were mixing the cement with their shovels: scrape, tap, scrape, tap. It was brutal work, unforgiving. Through me, Mr. Mitchell had been telling them all day that they were adding too much water to the cement mixture. I knew they were getting frustrated and tired. I couldn’t bring myself to correct them again. The air was heavy with humidity. The blistering afternoon sun bore down on us. Rosy patches of sunburn bloomed on my white cheeks. The engineering team sat in the shade of a nearby tree, playing with the children who had shown up to watch their fathers work. I stood in the middle, unsure of where I belonged, shuttling messages back and forth between the engineers and my community.

“Gringos aren’t made for this heat,” I joked with Feliciano, my host dad, unsure if I was talking about myself or the engineers. I grabbed a shovel and jumped into the scrum: scrape, grunt, “Ow!” Physical labor is a language, and I needed a lot more practice. Feliciano and the others would always be stronger than me, faster than me. I couldn’t keep up. And yet, I didn’t belong with the engineers either. They had a clearly defined role. They designed the bridge. They knew the plans and dimensions, the math. They had all the answers. But what was my role? I was between two worlds, with one foot in each culture – or maybe just a toe.

The interpreter’s role is to bring these two worlds together in mutual understanding. With effective cross-cultural communication, we can knock down barriers and build bridges, both literally and figuratively, connecting people from different cultures and creating a global community.